First Morning on the road! I successfully poached the previous night's campsite! I packed up and ate breakfast by the sea. I met an out of luck fisherman who was going to get a beer instead, said he had a PhD in drinking beer. Then I was on my way at 8:30. The ride in the morning was rolly and cloudy with short scattered showers.

I stopped in Coupeville for lunch. I decided to get a cauppichino to lift my spirits and it did! I also stopped at another farm-side produce stand and got a zucchinin and some blueberries. Yum! I rode a short distance to the south end of Whidbey Island and stopped at Ft. Casey. It was great. The Ft. was built in 1893. It had all the concrete buildings standing complete with some of the artillery guns from the time. I went wild taking pics all over the place. There was also a light house with some of the original shells. They were huge, 213 pounds! In hindsight I stayed way too long.

I saw a ferry come in and leave which I should have been on. When I did get on a ferry it was 3:00 pm. While waiting I met a Canadian couple taking a bike tour around the sound. They were nice, I swapped info with the husband and showed off my bike buckets to both. On the ferry I talked to another guy who was riding his bike on the ferry but just needed to get to Pt. Townsend. He was a bit of a loon. Kept going off about how Jefferson County (Pt. Townsend) was communist because they stole his car. Later in the conversation he mentioned that he did pay the car bill in time, go figure. He had a cool radio that was solar powered. We compared our gadgetry mostly.

I got to Townsend at 4:45. The day I set out for myself was still 30 mi. off. I should have camped outside of Pt. Townsend but I decided to keep going like yesterday. It was very foolish of me. When I started to ride the weather got more and more cloudy. I ran into scattered showers again. As I was riding I noticed that the forests are super lush like the rain forests of the other side of the Olympic Mountains. It seemed like a bad omen to me. I really pushed myself. Towards the end I was feeling pretty desperate and I started searching for places along the road to pitch my tent. I may have done just that except I didn’t have enough water. The lesson is, stop over extending yourself jackass!

At the end of the day came the Hood Canal bridge. It was a new shiny bridge with metal grating on the roadway. I soon learned that it was horrible to ride on. Everything was fine at first. Then I developed a little speed wobble so I slowed down. That just made it worse and I almost lost control on the hwy! I felt like I was very close to having a horrible accident. I was able to stop and regain my composure before going on. The trick is to ride all the way on the right side where there was metal plating set over the grating. I finally ended up at the Kitsap Memorial SP, outside of Poulsbo.

I took my first shower of the trip today. I had planned to be a stinky biker and not worry about my smell but it got to be too much for me. I wanted to take a shower in the park but the showers only took small bills and the park office was closed so I couldn’t get change. I ended up taking a free, extremely cold, and very public shower outside of the restrooms by the beach. It was a humbling experience. I vowed to take real showers from that day onward.

Tomorrow may be another long day. Hopefully with better weather.

First day of the tour! I was pretty nervous this morning. Woke up at 6:30 and finished getting things packed up. I was very scattered. I kept starting tasks then moving on to something else before I finished. My girlfriend Colleen made blackberry pancakes that were delicious. Thom came over at 8:00 and we all drove up to the Peace Arch park. We dorked around there for a while; took pics and made fun of Canadians. I had forgotten my helmet so Thom let me borrow his. I got on the road at about 9:30.

The day was perfect! Warm, some clouds,and really bright. I didn’t follow the map in Blaine because I started in a different place. I ended up taking a strange route to Bellingham, it was based on vague memories of training rides and hunches. I went and had lunch at home because I forgot my helmet. While I was there I grabbed some other things I forgot and posted this morning’s pics on Facebook. It was good to be home. I saw my roommate Brian and said goodbye to him. Every thing I did felt very significant and final. So I also took one last poop on my home turf. The ride out of Bellingham was about to begin but first I had to return Thom’s helmet.

While at his place I chatted with him and his brother Major. Thom gave me some delicious blueberries then it was time to hit the road!

The ride was absolutely gorgeous. I stopped several times to tag my ‘stache alongside the road and take pics. The entire route was on familiar roads. I’ve ridden them many times to train and for fun. I got to Bay View State Park and decided to push on to Deception Pass SP. I figured I could score a free campsite and I wanted to push myself a bit. As I got closer to the park the weather started to turn cloudy so my spirits dropped a little. There was construction on Hwy 20 going to the park so I was forced to take a detour on my way there. The detour put me right on the water so to get back on Hwy 20 I had to climb a giant hill. It took me forever and I was exhausted when I reached the top. On my way to the campsite I spied a service road with a gate across it. I quickly turned onto the rode and glided around the gate. I found myself in a large, empty group camp at the back of one of the campsite loops. I stealthily pedaled my bike with giant bright panniers past a bunch of motor homes including the camp host to the hiker-biker camp.

I unloaded my bike and set up camp for the first time. When I was getting ready to make dinner I met a guy named Dennis from Chicago. He’s been hitching from San Francisco. We traded stories about parts of the world we knew. He told me about a good hostel in S.F. I told him about the area and the islands in particular.

For dinner I made orzo soup with parsley and sauteed onion with a little squash on the side. I got the produce at an organic farm just outside of Bow on Chuckanut Dr. and Colony Rd. It was tasty! I talked to mom for a bit then to Colleen. It was good to talk to her but it made me miss her. I told her about how I snuck in the park using the service entrance and didn’t pay for the site. She was happy for me to start my journey. All considered it was a great start even if I am a bit chilly now.

In the summer of 2009 I rode my bike 2100 miles down the Pacific coast from Blaine, WA to San Ysidro, CA. I started riding on Aug. 12th and reached the border on Nov. 22nd. This is my ride diary. 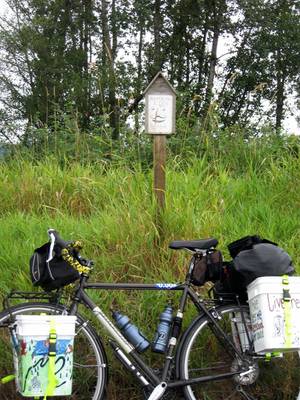 The event that started this off was my bike getting stolen on 4/20/07. This was a huge blow to me because I was car-free at the time. I borrowed my mom’s old Motobecane touring bike for a few months before getting a new one. I kept thinking about her big ride with the bike in the 70’s. She dipped the back tire in the Atlantic ocean and then rode across country to dip the front tire in the Pacific. She did the ride with a bunch of people and used a sag wagon to carry all her gear. The ride was part of an awareness campaign for bike safety or something like that.

When I was ready to buy a bike of my own I opted for a touring bike as well. I hadn’t been dreaming of ‘the big ride’ at that time. My fantasy was to ride my bike somewhere and then go for a hike. At the time I didn’t have a car so the idea was just to get out and go camping with out driving.

I didn’t start thinking about going on a big tour until I saw a book on the clearance rack of a local bookstore. The book was called Adventure Cycle Touring. It’s about taking giant tours across continents. This got me fired up to do a big long tour down the coast to the Mexican border.

At the time I was working a crappy job behind the seafood counter of grocery store. I spent many evenings looking out from behind the counter thinking about how I could swing a trip of this magnitude. I had saved up enough money for the duration, so that wasn’t a problem. I had most of the gear I needed. The only big items missing from my collection of camping gear was a lightweight sleeping bag, panniers, and a front rack. I bought a Surly front rack and a sleeping bag. I decided to make panniers using 4 gal square plastic buckets, the kind cat litter or mayonnaise come in. As I saw it the job was thing only thing standing in my way of going on the trip.

To fix that problem I decided to quit my job. So on my 5 year anniversary I handed in my letter of resignation. That was in the end of July 2009.

Prior to leaving I got all the last minute things in order. I decorated my bike buckets with a couple friends of mine. We all drew on them using sharpies. I love the way they came out. I also took a test ride with loaded panniers to Deception Pass SP and camped out for the night. The bike was easier to handle than I expected. I spent the night there and rode back the next morning. Most importantly I hung out with my girlfriend Colleen A LOT.

I remember tossing and turning in my bed the night before setting out. I had only partially packed everything and I was thinking about all the things that could go wrong. I probably slept just 4 hours that night. I woke the next morning wide awake and ready to ride!