Today I finally got around to calibrating the boil kettle on Sir Ballington. I have had the sight tube installed for a long time now but I never took the time to calibrate it. It was shipped with convenient stickers to use as markings. Unfortunately I let them sit out in my brew hut which isn't really doing a great job of protecting my equipment from the elements, so the stickers are ruined. I got around this by making my own marking system. Check out the pics below to see my method. 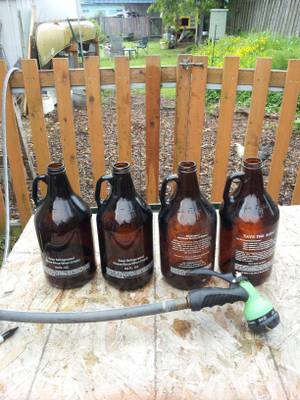 I decided to use growlers as the measuring device to fill the kettle. I had been putting this off for a long time because I couldn't think of a good way to measure out the water for calibration. In the end I decided that I didn't need anything super accurate (this was my big hangup) and that I just needed to get it done. I was thinking about it while filling and decided that with my size of vessel and amount of error wouldn't make a big difference (say 1 oz extra for 48 half gallon fills is only 1.5% error. 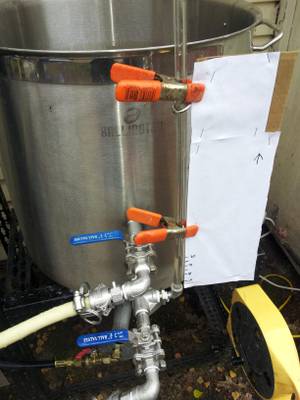 I made a calibration device using cardboard, printer paper, and a sharpie. I thought that I'd need to put in at least 1 gal for every mark on the kettle to see any change in the sight tube. I was totally wrong about that. Every half gallon increment made a decent change in the level of the sight tube. Starting after 8 gallons I made a mark for every growler dumped in the pot. 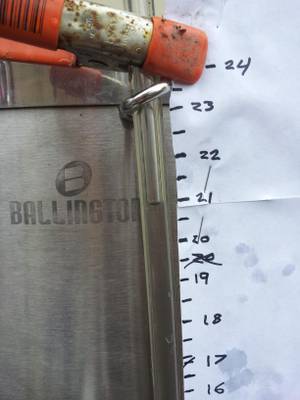 While I was filling I think I may have made some inaccurate marks around the 17 gallon mark. The tube was dry and the meniscus compressed. I manually siphoned (instant regret btw) the water up the tube and when it settled it formed a perfect meniscus. You can see the difference where I crossed out the initial mark. 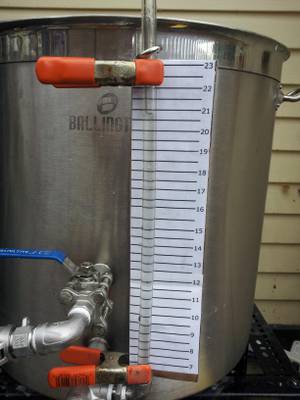 Next I scanned my hand written marks into GIMP (free Photoshop clone). I replaced my handwriting with perfect horizontal lines and numbers. Printed it out in the same scale (after much trial and error) and glued it to another piece of cardboard. I also covered it in packing tape to make it weather resistant. Even if this gets ruined by the weather I can always print it out again and make a new one.

I want to do some testing of the calibration and possibly remake the whole thing depending on the results. I'll definitely cut it down so it's not as wide. I'd also like to find a method to attach it to the sight tube without occluding the tube. I could use more packing tape but that's not ideal.

This is an accounting of how I designed and built my epic brew sculpture . It started off with a few goals:

From that list of goals I designed the geometry of the stand. I settled on a two tier design with the Hot Liquor Tank on the top tier so that the route from the HLT to the Mash Tun would be passive so the pump could be used to transfer from the MT to the Boil Kettle while the HLT was draining into the MT. This would allow for efficient fly sparging which requires wort moving out of the MT while fresh hot water it sprinkled on top.

I chose to line up the vessels with the MT on the left; HLT in the middle; and the BK on the right. Initially the plan was to seat the MT and BK under the HLT a little bit to save space. In the end that didn't turn out to be practical. The BK and HLT would have been too close to the burner under the HLT and the stand wasn't deep enough for this to really save any space. In the end my stand went from being about 4' wide on paper to about 5' wide IRL. It's certainly not a problem but I do have less space under the brew canopy as a result.

The kettles were purchased from kitchenfantasy.com. Basically the price worked out to be comparable to other SS pots of a slightly smaller size. I got two 18 gal pots for the price of two 15 gal and one 25 gal for the price of a 20 gal. Not a bad deal. In hindsight I wish I would have gotten two 25 gal pots for greater grist capacity in the MT. This works but I'm limited to about 1.077 OG with normal grist weight.

To put this all into perspective here's a gallery of the construction and final build of Sir Ballington Brewstand:

How To Write A Brew-log

I've heard people ask about what should be in brew-logs a few times. The answer really depends on your situation. The one commonality is the goal of a brew-log, which is to provide enough information to be able to recreate your brew, exactly. I try to record everything that I can control. When I was an extract brewer I didn't have to write very much. When I moved to all grain I had to redesign my logs to accommodate A LOT more information.

These are the variables that I record on brew day:

Note: The first two sections are important for all brewing setups. The last section is specific to my setup which is a three vessel batch-sparge all-grain system. 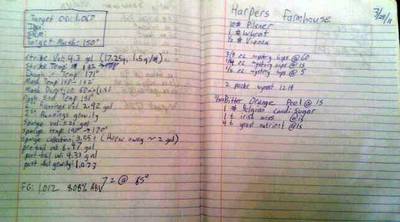 Beyond brew day there are other things to note:

I also tend to fill all the margins with miscellaneous notes like efficiencies, calculations, and deviations from my standard procedure.

When you keep detailed brew-logs you will be able to recreate recipes much easier. In addition it makes tracking or troubleshooting changes to your system much easier. Of course you won't need to keep logs that are exactly like mine but this is a good starting place. Use the variables that you measure and record them every time for consistent quality brewing.

The Death of Beer? - Food - The Atlantic

I've been seeing a lot of talk about the recent decline in the top beer manufacturers sales lately. The big number to focus on is the decline in Bud Lite sales, which haven't declined in a ridiculously long time (39 years maybe?). On the other hand craft beer has been a growing segment for the past 20 years. That's been said over and over. I just read an article my the Atlantic that put an interesting point into the discussion, where macro-brews are on the decline liquor and wine are growing. The article then makes some speculations about what this means given that it is more of an opinion piece I stopped paying attention (plus the title is "The Death of Beer" so and that's just retarded). You can boil it down to this: people are drinking less beer and more wine or liquor. That's interesting. Personally I think that beer will regain dominance with the accent of craft beer.

The main reason why this stands out to me is because of a conversation I had with a salesman from a beer/wine distribution company about the changing nature of the industry. Like the big brewing companies the distribution houses have been consolidating (he works for one of those). He said that the big ones in WA have been buying a LOT of liquor. That is really interesting because in WA the state does its own distribution. Those distribution houses are banking on getting the law changed so that the state will get out of the liquor distribution game. This would be a huge boon to the distributors not because the margin on liquor is much better but because the cost associated with distributing liquor is much lower. Think about it: you could buy a 6-pack of your choice of beer for about the same cost as a tiny 250 ml bottle of liquor. The weight and size of that 6-pack is going to make it more expensive to distribute. Thus the stockpile of liquor in a state where private companies can't sell it.

I don't know if any of this is really true but I think it's worth looking out for.

Original article: The Death of Beer

Posted via email from Ian's Posterous